It is said to be the oldest café of Paris. It was in 1684 at 13 rue de l’Ancienne Comédie (formerly rue des Fossés Saint Germain) when Francesco Procopio dei Coltelli opened the Café Procope.
This is the oldest café in Paris, and when you enter this grand café and marvel its large chandeliers and mahogany and pine furniture you can feel the atmosphere of three centuries of history. The Café Procope was the birthplace of all of the intellectual upheavals that shook Paris.
Great men made, and still make (along with great women), Procope a magical place.

The Sicilian Procopio had an ingenius idea in 1674. Because Paris was saturated with taverns and cabarets full of drunks, he decided to open a beautiful place for the refined gentlemen of the court of Louis XIV. His first café was situated on rue du Tournon, and then moved to rue de l’Ancienne Comédie.
Here, you were not served wine, but coffee. In fact, during the years of 1670, the coffee that first came to the big towns of Europe from Yemen made its Paris debut here.
But the place is especially known for its delicious ice cream, which was its greatest success. During this time, ice was taken on cold days from lakes and rivers and stored in ice boxes, and stored in cellars for the summer. 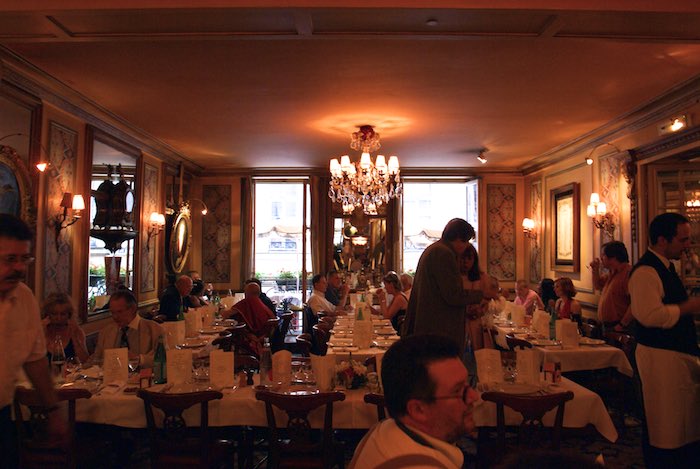 This café is tastefully and elegantly decorated with its marble tables and luminous crystal chandeliers, and their light is delicately reflected in its large mirrors. Here, you feel like you are at the Galerie des Glaces at the Château Versailles.

The Procope pioneered opening its café’s doors to women, which was a first for Paris. The formula created by Procope became a great success. By the year 1700, Paris had some 300 cafés and 1750 cabarets. It was a huge leap forward that caught the attention of the various newspapers of the period.