From the south of the Loire to the Pyrenees, the south west of France is geographic aera with imprecises borders.

From Clermont-Ferrand to Birarritz via Carcassonne and Bordeaux, is the rugby country. Yet, it is also a state of mind, marked by a culture of conviviality and sharing. This attribute is found most visibly in its gastronomy, so in Paris the Chez Papa restaurants allow you to savour the cuisine and experience this state of mind. Unusually for Paris bistros, meals are served throughout the day and the waitstaff are exceptionally friendly and helpful. 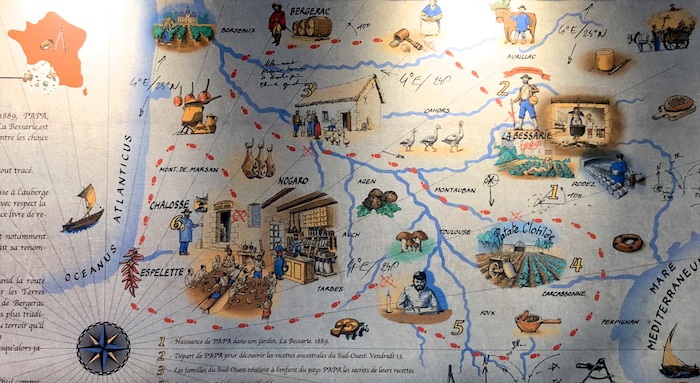 Because Papa, ‘Dad’, is a famous character and well known for some 30 years by the good trenchermen of the Capital. He made his reputation on a generous gastronomy of the south-west of France. The duck, of course, with all its specialities is the main affair. Yet the appetizers, for instance from the South West of France, a foie gras of an entire duck that is delectably pan fried, country cured ham, pan fried duck aiguillettes, chicken gizzards salad perfect with a white wine as Cote de Gascogne. 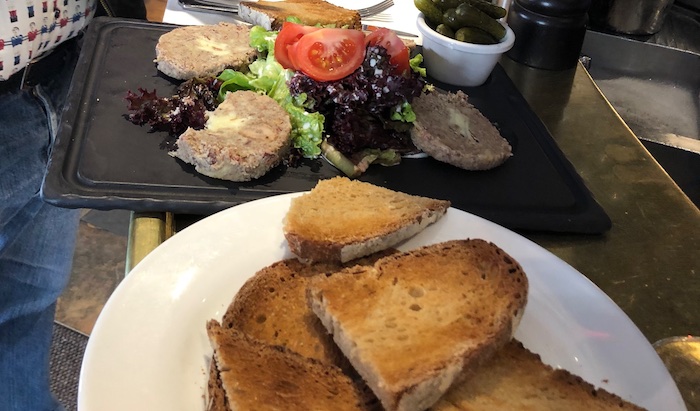 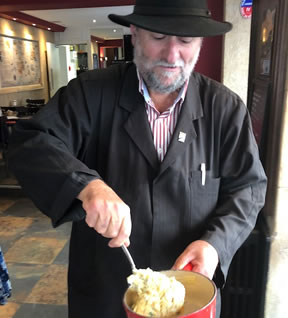 Papa – whose real name is Bruno Druillhe- Has been working in Paris for the past 30 Years. However, he is a native from the province of Aveyron, which is near the verdent Lot River.

He has developed a unique atmosphere highlighting the cuisine of the South West. In the kitchens of his restaurants one can hear the gentle sizzling of peppers and onions and warming smell of the cassoulet baking in the oven.

Duck is one of the traditional dishes of the expansive region surrounding Toulouse. So, why not begin your meal with the “Perigord board” including the “Papa whole duck foie gras”, chicken gizzards, duck wing, or the trio of pan fried duck foie gras escalopes. ( 21€). 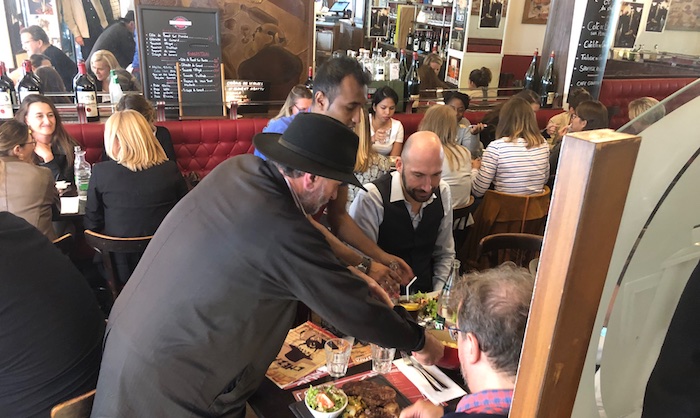 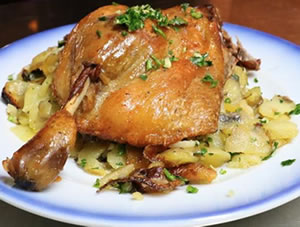 Apart from the variety of duck delicacies, Chez Papa is the perfect bistro to discover many emblematic dishes of the great South-Western province of France. Such as the specialties of the Basque country on the Atlantic coast in between Bayonne and Saint-Jean-de-Luz.

One of our favourites are – ‘The classical piperade with tomatoes, green and red peppers, onions, raw country ham, poached eggs and Espelette pepper’. Also the garbure, a special hotpot of green cabbage, carrots, beans, duck’s neck and wings or the famous achua ( written Axoa) Espelette pepper, which perfumes the pâtés.

Of course, it would be a crime to forget the cassoulet, the “Special Papa” gratiné with breadcrumbs, beans, duck and pork sausage casserole and the duck confit. A sample of authentic cheeses such as the sheep’s blue or delicious Saint-Nectaire deserve to be savoured as well as the home-made desserts highlighted by the chocolate mousse.

To accompany, all these striking specialties, Chez Papa is also the perfect place to sample and discover some South-Western wines … such as the tannic and fruity Madiran and Cahors, or the most versatile and enchanting Bergerac.

Find your Chez Papa in Paris among its 12 restaurants.