Lipp is an integral part of French history. It’s a legendary place that has attracted Parisiens and tourists alike. It is, in itself, the center of the story of 20th century Paris, when Saint-Germain des Prés was at the top of the world in ideas and politics. 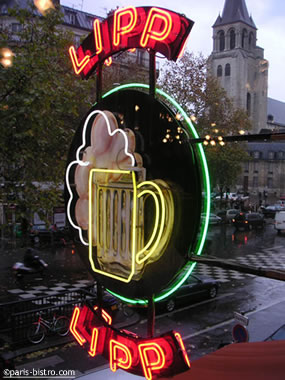 Even integrated in a large group, Lipp is still the quintessential Parisien brasserie. The French still make pilgrimages there in order to catch a glimpse of a well-known political figure or a star. Many governments have raised and have fallen at Lipp’s.

Lipp owes much of its glorious fame to its owners during 50 years, Marcellin and Roger Cazes. 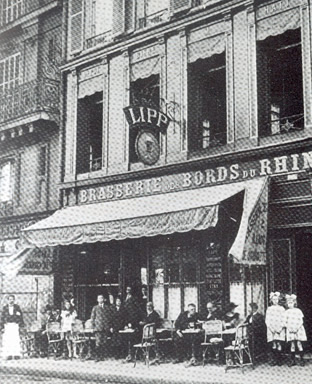 Like many of his contemporaries (Wepler or Zeyer), Léonard Lipp couldn’t stand to live under Kaiser rule after the French-Prussian war of 1870 and the loss of the Alsace-Lorraine region.

He soon emigrated to Paris in 1880 and at 151 boulevard Saint-Germain, he created the Brasserie des Bords du Rhin, named after his beloved birthplace. He offered the local fare of his birthplace, such as sauerkraut and beer. For 25 years, Mr. Lipp built the reputation of his brasserie.

Then in 1918, Marcellin Cazes took over the business and changed the name from the Bords du Rhin to Brasserie Lipp.

More than anyone, Marcellin Cazes represented the people of Aveyron in Paris at the end of the 19th century. He was born in Laguiole in 1888, to a family of eight children, and set off for Paris when he was 14 years old.